One member of the research team (Gary Baker)has wrote a fascinating piece on the recently discovered early modern shipwreck found at Tankerton Beach near Whitstable, Kent. You can read the full article here: https://theconversation.com/what-the-16th-century-shipwreck-found-on-the-kent-coast-can-tell-us-about-trade-in-tudor-england-100392

The website (www.medievalandtudorships.org) has recently received some national and regional press coverage. The website which houses a searchable database of 53000 ship-voyages and interactive route map and port map was featured in the Daily Mail, and several regional papers, one Irish paper and on the BBC regional website. On Monday 29 January Craig was interviewed for the BBC’s Radio Solent ‘Drive Time’ show (pod cast can be found here: in which he discussed aspects of the website and what it tells us about the ports of Hampshire.
The links to some of the coverage are here:

Building on the database of c.53,000 ship-voyages that is now live Dr Craig Lambert undertook some preliminary investigations into medieval and Tudor ship names to mark the naming anniversary of the RRS Sir David Attenborough

In July 2015 The Guardian and several other major newspapers (including The Times)  published articles on the discoveries made on Henry V’s fleet at Agincourt. 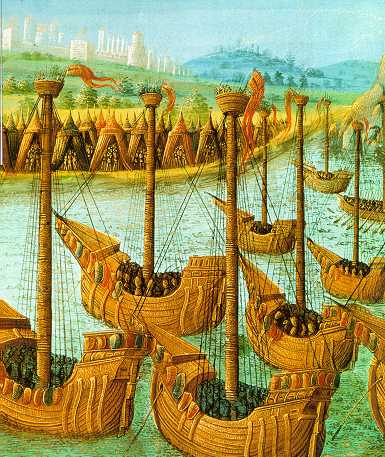 During the course of the research for this project I stumbled upon a series of references in the English Exchequer that, for the first  time in such detail, allowed an investigation into the naval preparations for Henry V’s Agincourt campaign:

On 11 August 1415 a large fleet slipped out of the Solent and headed to the Chef de Caux.

As the fleet sailed past the Isle of Wight swans swam amongst the ships, a good omen.[1] On board these vessels were approximately 12,000 men, including Henry V who was aboard his ship the Trinite Roiale.[2]  The size of the army indicates this was a large fleet.

Raising such a fleet to transport 12,000 soldiers with equipment and horses was a complex process underpinned by a sophisticated bureaucracy.[3] While the crown could draw on a series of methods to assemble fleets ultimately armadas were raised through the requisition of merchant ships. The scale of these operations was immense. In 1346 to transport 14,000 men the English put to sea a fleet of 747 ships, of which 687 were requisitioned merchantmen.[4] In 1417 of the 256 ships that transported Henry V’s army 124 were requisitioned from English ports.[5] Gathering fleets of this size meant that as many eighty ports might be called upon to provide shipping. Obviously assembling such fleets took time. Normally, it would take between two to nine months to organise a large fleet.  The question is can we reconstruct the English logistical preparations of 1415? This is not without difficulties because we lack definitive payroll evidence for the fleet. All is not lost, however, and we can analyse English naval preparations from a variety of other sources.

The initial moves to assemble the fleet were taken on 27 February 1415 when Richard Cliderowe expended £2,000 hiring ships in Holland and Zealand.[6] On 26 April he spent a further £2,566 13s 4d hiring ships from the same locations. On 18 May he made a final payment of £449 6s 9d to mariners from Holland. It has been argued that these sums would have hired a fleet of 631 ships.[7] We cannot be certain how many foreign ships were hired, but the payment of Ton-Tight (paid at the rate of 2s per ton of ship for every quarter it was in service) may not have been the true cost of hiring foreign ships. Commercial freight rates fluctuated between 10s and 25s per ton and it seems unlikely that Low Countries shipowners hired their vessels out for less than the going rate. This means that the foreign contingent may have been fewer than 150 ships.

Henry certainly expected English ships to participate in the crossing.  On 19 March the admiral, the Earl of Dorset, was told to arrest all ships over twenty tons and have them at Southampton by 8 May.[8] The Cinque Ports were also ordered to ready their ships. On 11 April an order was issued to Nicholas Mauduyt, sergeant-at-arms, to seize all ships of the realm, including foreign vessels, from the mouth of the River Thames to Newcastle and have the English vessels sent to Southampton by 1 May.[9] The foreign ships were to be made ready at Winchelsea, London or Sandwich by 8 May. On 27 April he was issued with 66s 8d for the costs associated with this work.[10] Robert Spellowe, sergeant-at-arms, was to do likewise in the ports stretching from the south bank of the Thames to Bristol.[11] In July the process of gathering ships continued as John Acclane and John Scaldock were told to arrest all the ships in London over 20 tons.[12] The fleet certainly contained English vessels because Henry was still paying their arrears in October.[13] We also know that the king’s ships Katerine of the Tower, Nicholas of the Tower, Trinite Roiale, Petit Trinite of the Tower, Gabriell of the Tower and the Petit Marie of the Tower were all involved in the crossing.[14]  If Henry’s requisition officers were successful over March, April and May it is not unreasonable to assume that a few hundred English ships were arrested and sent to Southampton. The fleet of 1417, which took Henry’s army to the mouth of the Touques, was composed of roughly equal numbers of hired foreign ships and requisitioned English vessels and may be taken as an indicator of what the king achieved two years previously.

It is possible that some of the English ships arrested over the first half of 1415 were diverted to other duties. Over the course of February through to May 1415 a series of fleets were organised to protect the coast and the ships gathering in Southampton Water.  One of these fleets, sailing in the early part of 1415, was commanded by Gilbert, Lord Talbot who had 150 men-at-arms, 300 archers and a crew of 360 mariners under his command.[15]  On 19 June another small fleet was prepared to transport to Gascony a force of 80 men-at-arms and 400 archers under John Tiptoft.[16] In late April and early May Robert Bodyngton received £66 13 4d for keeping the sea near Southampton. [17] At least seven ships were involved in keeping the seas over the months of February to May. Protecting the coast and the gathering fleet was an expensive undertaking. From 5 December 1414 to 1 May 1415 £2,312 16s 4d was issued for the wages of men-at-arms, archers and sailors to man these flotillas.[18]

The size of the fleet

The question remains as to how large was the fleet that sailed in 1415? The authors of the Gesta Henrici Quinti and St Albans Chronicle have the fleet numbering 1,500 ships.[19] This seems too large. In 1346 Edward III needed fewer than 750 ships to take an army of 14,000 men to St Vaast la Hougue.[20] Henry V’s force in 1415 was smaller. Henry’s army of 1417, which may have numbered 16,000 men, was transported in 256 ships, although these may have made several crossings.[21] To ship an army of 12,000 men in one go would probably have required 700 ships. A fleet of this size would mean that it was dispersed over a wide area. In 1346, for example, parts of Edward’s fleet were stationed at Beaulieu and another section at Portsmouth.[22] We know Henry was based at Portchester Castle and so a section of the 1415 fleet must have lain at anchor in Portsmouth Harbour.  If the fleet was spread over a wide area we can understand why the author of the Gesta, keen to convey the sheer scale of what lay before his eyes, overestimated the size of the fleet.[23] As he stood on the deck of a ship he would have witnessed the fleet grow in size by the hour as each section gradually coalesced to form one large armada.

Given the nature of the source material it is difficult to be precise about the size of Henry’s fleet in 1415. Nevertheless, as a guide we can draw on evidence from earlier campaigns and Henry’s later expedition of 1417.  It is likely the fleet that sailed out of Southampton water in August 1415 numbered approximately 700 ships. The fleet was perhaps composed of a few hundred hired ships from the Low Countries and a few hundred English vessels.  At the same time a squadron of ships was kept at sea to protect the coast and the gathering fleet of transport ships. As the armada sailed out in August it would have made a significant impression. We know the king’s ships were freshly painted and decorated with depictions of animals and the royal coat of arms, and these brightly coloured ships would have sparkled in the summer’s morning as they sailed towards Harfleur and into the annals of history.[24]

Image of the naval battle of La Rochelle 1372, from the Chronicle of Jean Froissart, taken from Wikipedia and is in the Public Domain

The author gratefully acknowledges funding by the Arts and Humanities Research Council from which this piece is derived:  ‘The Evolution of English Shipping Capacity and Shipboard Communities from the early 15th Century to Drake’s circumnavigation (1577)’, based at the University of Southampton (AH/L004062/1).

[6] TNA Exchequer (Receipt, Warramts for Issues) E 404/619 (27 February). Cliderowe was an inspired choice for this duty as he owned the Cog John and was therefore familiar with business of shipping and freightage charges; see Calendar of Patent Rolls Preserved in the Public Record Office: Henry V, 1413-16 (London, 1891–1916), p. 293.